HomeBlogNewsUnconstitutionality of the rule that gives preference to the mother in the guardianship and custody of a minor. 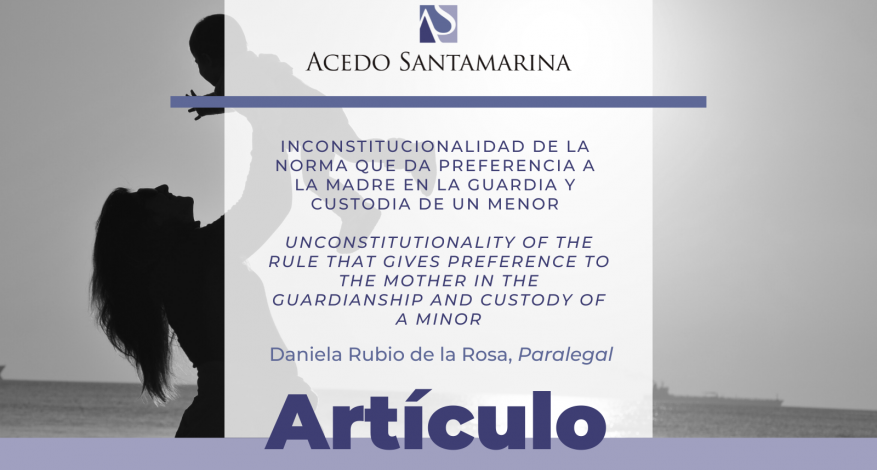 Unconstitutionality of the rule that gives preference to the mother in the guardianship and custody of a minor.

Formerly, the law was conceived as positivist to the extreme, that is, the legislator was the one who took the leading role in the legal system; he issued rules, which were not questioned whether they were just or unjust, but only legal certainty was important, which was the only value to be safeguarded. It was after the Second World War that a paradigm shift occurred, which resulted in the Nuremberg Trials, where the world and the doctrine questioned the type of legal system that had been followed, since the rules issued by the legislator ended up being unjust, since they did not foresee all the assumptions. In the case where the law contains legal assumptions and consequences, if they lack intrinsic value and fairness, then they are unjust.

Under this paradigm, it is necessary to change the study of law: beyond legal interpretation – since this was insufficient to understand the content of the rules – to give birth to legal argumentation: now the leading role is played by judges and no longer by the legislator, who will be in charge of interpreting, but not only this, but that such interpretation must be properly argued.

As a consequence of the aforementioned, the importance of the Judicial Power in our legal system in the 21st century has been notorious. Among the organs that make it up, we have the Supreme Court of Justice of the Nation, which has adopted an important place on issues of great relevance at present, as well as to rule on the constitutionality or unconstitutionality of a legal rule.

Currently, our legal system seeks to protect the human rights of individuals; however, since there is no perfect legislator, sometimes the legislator issues laws that endanger fundamental rights; therefore, it is important for the Supreme Court of Justice of the Nation to hear and rule on those laws that are contrary to human rights.

On November twenty-first, two thousand nineteen, the First Chamber of the Supreme Court of Justice of the Nation ruled the unconstitutionality of article 282 paragraph B section II third paragraph of the Civil Code of Mexico City, which provides that, in case of divorce of the spouses, if they have children in common, the mother has preference over the guardianship and custody of children under twelve years of age.

In the analyzed case, the father of a twelve year old minor filed an indirect protection action alleging that the mentioned article 282 was discriminatory. Said amparo was processed before the Second District Court in Civil Matters in Mexico City, whose files were forwarded to the Fourth District Court of the Auxiliary Center of the Seventh Region, with residence in Acapulco, Guerrero, which dismissed the amparo proceeding and denied the amparo regarding the unconstitutionality of the aforementioned article.

Through an appeal for review heard by the Fourteenth Collegiate Court in Civil Matters of the First Circuit, such court ordered the referral of the case file to the Supreme Court of Justice of the Nation, due to the fact that the constitutionality of article 282 of the Civil Code for Mexico City was challenged, considering it contrary to the human right of equality and non-discrimination provided in article 1 of the Political Constitution of the United Mexican States and in the international treaties to which the Mexican State is a party.

The issue analyzed by the Supreme Court of Justice of the Nation is recurrent in family relationships when the spouses are going through their divorce and there are minors involved. For several years we have seen that women have a greater preference over the guardianship and custody of their children, taking away from the father certain relevance and opportunity in the life of the minor.  Nowadays, women are fighting for our rights, among these, our dignity and equality in various social areas, in which we are treated differently simply because we are women; as a result this has brought multiple movements that have encouraged the creation of new laws to protect us and to reform certain laws that allow us to have the same rights and opportunities as men.

However, because it is an issue that has taken relevance does not mean that there are no laws that discriminate against men, although they are scarce; it is important to remember that this is not a struggle of who is better, it is a struggle for equality for all.

When we speak of equality we refer primarily to the treatment that the State gives to people so that they have the same access to opportunities to enjoy human rights, without distinctions, since we are all persons and enjoy the same rights. However, the legal provision analyzed does make distinctions and marks a clear preference for the mother, making more evident the role that we as women must follow, as well as fulfilling the role of being housewives and dedicating ourselves to the care of the children, displacing the gender equality that today has been sought with great care to become a reality. In turn, the law should not distinguish in favor of one of the parents because of their sex, but rather should seek to protect the best interests of the child for guardianship and custody.

Another criticism in this analysis is that the judge only behaved as a simple applicator of the rule, without regard to the specific case and special circumstances of each of the parties; the legal operator, having such a vast legal system, did not take into account human rights, did not weigh the values with respect to which he had to decide, and simply limited himself to the application of a rule that falls short, despite the fact that he was obliged to be protectionist in a matter involving the rights of minors.

It is important that as jurists we move away from a scarce and reduced conception of law as a set of rules, since history itself has shown us that law is not only made up of rules that are issued by the Legislative Power, but that it is governed by a series of principles and values, which in turn invite us to take the concrete case and analyze it without standardizing and without considering all cases as equal, since law responds to a reality, and each reality is different.