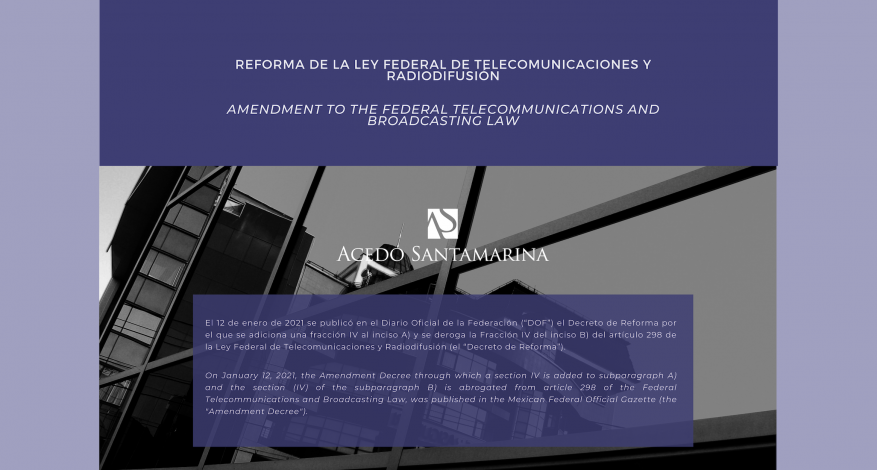 Amendment to the Federal Telecommunications and Broadcasting Law.

On January 12, 2021, the Amendment Decree through which a section IV is added to subparagraph A) and the section (IV) of the subparagraph B) is abrogated from article 298 of the Federal Telecommunications and Broadcasting Law, was published in the Mexican Federal Official Gazette (the “Amendment Decree”).

Under the Amendment Decree, the penalty for carrying out violations to the law, regulations, administrative provisions, fundamental technical plans and other provisions issued by the Federal Institute of Telecommunication, as well as to the concessions or authorizations not expressly referred to in Chapter II of the Federal Telecommunications and Broadcasting Law (the “General Violations”), which was provided for in Section (IV) of the subparagraph B) of Article 298 of the Federal Telecommunications and Broadcasting Law (the “Law”) was abrogated and included, with exactly the same text, in section IV, subparagraph A of the aforementioned Article 298. In consequence, the penalty for breaching the General Violations decreased from 1% to 3% to 0.01% to 0.75% of the income of the concessionaire or authorized.

It is important to mention, that Section (IV) of the subparagraph B) of Article 298 of the Law that is abrogated under the Reform Decree, was declared unconstitutional by resolution of the Supreme Court of Justice of the Nation in the normative section of the 1%, for considering that such provision violates Article 22 of the Political Constitution of the Mexican United States, as it is an excessive penalty that neglects the due relationship between the conduct, the consequences produced and the applicable penalty, besides that the minimum fine is greater than the minimum fine applicable for other infringements. This led to the jurisprudence 2ª/J. 167/2017 (10ª). 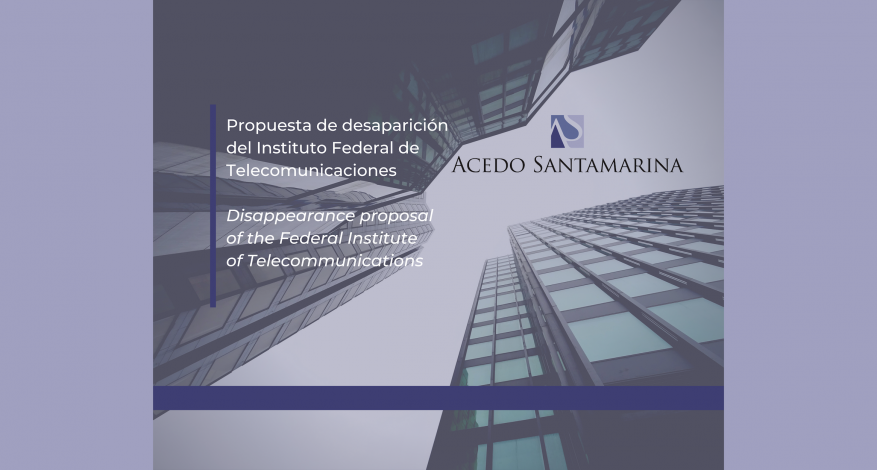 Disappearance proposal of the Federal Institute of Telecommunications

At the morning conference on January 7, 2021, the President of the Mexican Republic, Andrés Manuel López Obrador, expressed his intention to present a bill to disappear several autonomous bodies, including the Federal Institute of Telecommunications (“IFT“, as per its Spanish abbreviation) and the National Institute of Access to Public Information, with the aim of reducing public spending.

With regards to the possible disappearance of the IFT, the President mentioned that the functions currently performed by the IFT could be absorbed by the Ministry of Communications and Transportations (“SCT“) and openly questioned the acting and results of the IFT, accusing the commissioners of being “closely linked” to the dominant and foreign  companies. The President finally indicated his intention to present in February a bill to disappear the IFT.

From our perspective, the disappearance of  the IFT would, in principle, imply the following:

Notwithstanding the previous statements, on December 16, 2020, the President sent to the Permanent Commission of the Congress a request for Sayuri Adriana Koike Quintanar and Laura Elizabeth González Sánchez to be ratified as new IFT commissioners instead of former commissioner Gabriel Contreras and the current commissioner Mario Fromow, who will leave office this year.