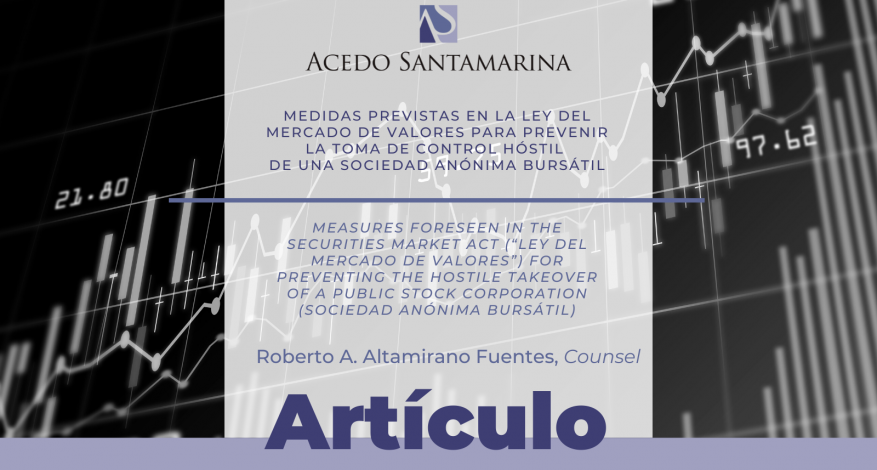 The First Chamber of the Mexican Supreme Court of Justice has stated that the control of a stock corporation “may be actualized by the holding of a certain patrimonial power or by a power of management (administrative) direction“, and held that the plurality of types of control may be classified, depending on its cause or origin, in two groups:

(i) Corporate control derives from the holding of a certain percentage of shares representing the capital stock, which allows its holders to exercise the right to vote in shareholders’ meetings to impose decisions to such meeting, to the board of directors, to appoint and remove directors or to direct the corporate policies of the company.

On the other hand, according to the Supreme Court, the change of control of a stock corporation can also be distinguished, depending on whether it has the collegiate approval of the shareholders and the governing bodies of the company, or not, into hostile or undesired, and friendly or desired.

To ensure that takeovers are desired by the corporate governance bodies of the companies, Article 48 of the Securities Market Act establishes the possibility that the bylaws of public stock corporations may stipulate measures to prevent the undesired or hostile acquisition by third parties or by the shareholders themselves, of shares that grant control of the company, subject to the following requirements:

In the event that they do not comply with the above-mentioned requirements, the measures established in the bylaws will be null and void.

Additionally, according to the same article 48, in order to preserve the principle of non-discrimination and the protection of minority rights, public stock corporations are prohibited from introducing certain provisions foreseen for stock market promotion corporations (“sociedades anónimas promotoras de inversion”), specifically those contained in sections I, II and III of Article 13 of the Securities Market Act, in the understanding that, in case such prohibition is not respected, the National Banking and Securities Commission (“Comisión Nacional Bancaria y de Valores”) may authorize the adoption of clauses of such nature.

In analyzing the constitutionality of Article 48 of the Securities Market Act, the First Chamber of the Supreme Court of Justice of Mexico held that the measures of protection against the loss of corporate control derived from a “hostile” purchase of shares, established in such legal provision, are compatible with the economic freedoms recognized in Article 5 of the Mexican Constitution, since, among other matters, such measures “empower individuals to associate in order to voluntarily restrict their own contractual freedom for addressing the risk of sales of shares that may jeopardize the control of the company“, without incurring in absolute prohibitions.

Derived from such analysis of constitutionality, the First Chamber issued the decision entitled: “SOCIEDADES ANÓNIMAS BURSÁTILES. ARTICLE 48 OF THE SECURITIES MARKET ACT, WHEN REGULATING THEIR POWER TO PROVIDE IN THEIR BYLAWS MEASURES TO PREVENT THE ACQUISITION OF SHARES THAT GIVE CONTROL OF THE COMPANY TO THIRD PARTIES OR TO THE SAME SHAREHOLDERS, DOES NOT VIOLATE THE FUNDAMENTAL FREEDOMS RECOGNIZED IN ARTICLE 5 OF THE CONSTITUTION”.