HomeBlogNewsADOPTION OF LAWS AND REFORMS CONCERNING THE FEDERAL JUDICIARY 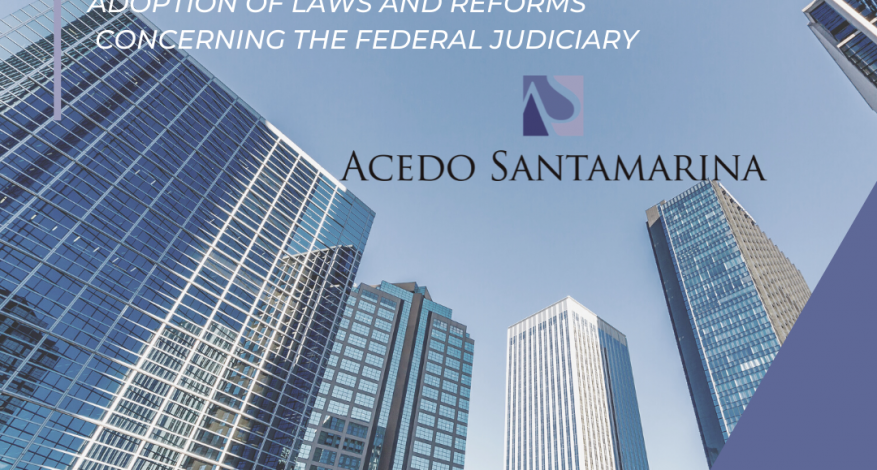 ADOPTION OF LAWS AND REFORMS CONCERNING THE FEDERAL JUDICIARY

Thursday May 20th, 2021By AcedoSantamarina

As part of the implementation of the Constitutional Reform related to judicial matters, published in the Federal Official Gazette on March 11, 2021, the Mexican Congress approved the laws and reforms to reorganize the structure and functioning of the Federal Judiciary.

The draft law approved by the Congress provides the expedition of a new Federal Judiciary Organic Law and the Federal Judiciary Career Law. It also amends, supplements, and repeals several provisions of the Injunction Law (or Amparo as it is known in México), the Federal Public Defender’s Office Law, the Federal Code of Civil Procedure, the Federal Law on Workers in State Service, Regulatory of paragraph b) of Section 123 of the Constitution, and the Regulation Law of paragraphs I and II of Section 105 of the Constitution.

The amendments approved by the Congress include (i) the incorporation of the Judicial Disputes Commission of the Federation related to labor conflicts, (ii) the establishment of the Institute of the Public Defender’s Office and the training of its staff by the Federal Judicial Training School, (iii) adjustments to focus the jurisdiction of the Supreme Court of Justice of the Nation in exceptional constitutional matters and fundamental rights, as well as to transit from a system of jurisprudence of reiteration of criteria to one of obligatory precedents, and (iv) the replacement of Unitary Circuit Courts for Collegiate Courts of Appeal.

According to its authors, the new laws and reforms intend to strengthen actions to address nepotism, conflicts of interest, sexual harassment, and corruption within the Federal Judiciary, to guarantee independence, impartiality, suitability, stability, professionalization, and specialization of public servants, and provide the mechanisms to achieve an adequate administration of justice.

One of the most controversial points in the legislative process was the incorporation of a transitory provision for implementing the constitutional reform of the Federation Judiciary and the corresponding regulatory Acts, which establishes that the current president of the Supreme Court of Justice of the Nation and the Council of the Federal Judiciary extends the duration of his assignment until November 30, 2024, on the understanding that the period for which Minister Arturo Zaldivar was elected runs from January 2, 2019, to December 31, 2022. Several sectors of society have expressed their opposition to this extension of the mandate as unconstitutional. It is foreseen that the Supreme Court of Justice of the Nation will carry out the analysis corresponding to this transitory provision through the action of unconstitutionality that may be filed once the laws and reforms mentioned herein be published by the Executive in the Official Gazette of the Federation.