HomeBlogNewsABACO (Basic Agreement of Shares to be Purchased): an instrument used in seed capital investments 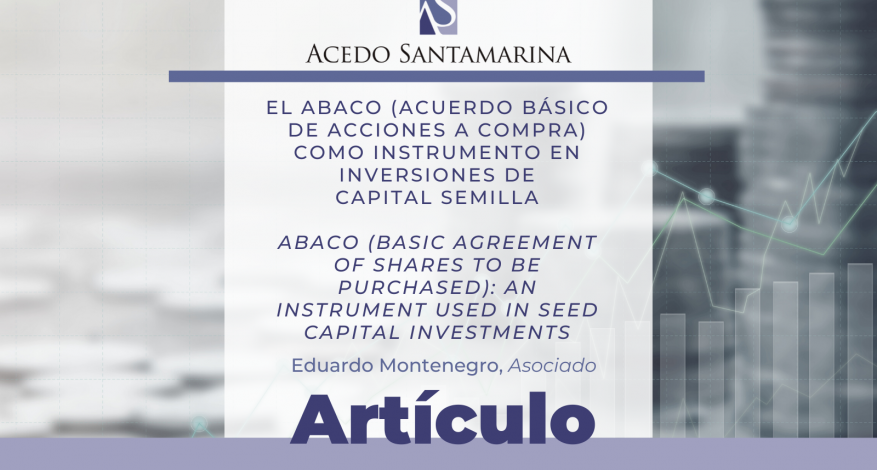 ABACO (Basic Agreement of Shares to be Purchased): an instrument used in seed capital investments

Despite the adverse economic effects that the Covid-19 pandemic has generated in Mexico and worldwide, private equity funds in our country have shown a high level of resilience and potential to continue raising capital and investing, as evidenced by the figures reported by AMEXCAP (Mexican Association of Private Equity) in its latest report “Framework of the Private Equity Industry in Mexico”, published in December 2021. According to said report, the accumulated committed capital of the private equity industry, at the end of the first half of 2021, grossed $63.8 billion USD; furthermore, at the end of 2020, more than $5.3 billion USD have been invested (second best year since 2015), which may be exceeded once the  2021 EOY figures are reported, since the amount of capital invested during the first half of last year was only 20% lower than the total amount invested during 2020.

Considering the above, it is important that entrepreneurs seeking investment of private equity funds or “angel investors” to become familiar with the contractual instruments that will facilitate negotiations with such investors. In this first article, we will focus on the first stage of private equity investments, which is the so-called “seed capital” and on one of the most common instruments during such rounds, the Basic Agreement of Shares to be Purchased (Acuerdo Básico de Acciones a Compra or ABACO, by its Spanish acronym).

Seed capital is the type of financing sought by entrepreneurs during the first stages of their business, to consolidate and develop it, by offering an equity participation to investors which are usually FFF (Friends, family and fools), “angel investors” or certain private equity funds, who, in addition, may usually provide specialized advice to entrepreneurs in order to define the business plans and boost the business growth. Seed capital is seen as an alternative to traditional financing mechanisms offered by banking institutions or other financial market participants and occurs as an initial stage prior to raising a financing round by venture capital funds, which represent significantly higher amounts.

The ABACO is an investment agreement commonly used to document a seed capital financing. The ABACO derives from the SAFE (Simple Agreement for Future Equity), which is an instrument developed in 2013 by Silicon Valley funds and which is still relevant and used in great part of the “seed capital” transactions in the United States of America.

Through the ABACO, the investor will fund the promoted company through a contribution for future capital increases, which may be: (i) capitalized once the conversion events to which ABACO is subject to are triggered, and therefore, the investor will receive the corresponding shares according to the valuation established at the time of conversion, or (ii) repaid to the investor in the event of an exit strategy or the dissolution of the promoted company; as both scenarios are described hereunder.

In this regard, it should be noted that although ABACO is an instrument that can be converted into shares, it should not be confused with other instruments such as convertible notes or credits, in which the investor may also receive a participation in the capital stock of the company upon the triggering of a conversion event, however the aforementioned are debt instruments, hence the financing is subject to an interest rate and maturity dates, which does not occur in the ABACO, as it is not a debt but a capital instrument, at least from a legal and contractual point of view.

The ABACO is widely used in seed capital investments since it extends the valuation of the promoted company (price per share) until the next investment round, which makes the negotiation of an ABACO considerably efficient, and for the valuation of the shares, upon conversion, to be fairer for both the entrepreneur and the investor.

The intention of ABACO is to be a straight-forward instrument in terms of its structure and clauses, therefore, it usually focuses on establishing the following:

a) Conversion Events. Which are triggered by a qualified investment, meaning, a subsequent financing round in the promoted company aimed to raising capital by qualified investors.

Once this scenario occurs, the equity invested through ABACO is capitalized and the promoted company issues shares in favor of the investor at a conversion price which will usually be the lowest price per share paid by the investor(s) in the next financing round. In this regard, the ABACO investor can negotiate a discount on said conversion price, as well as a valuation cap; which are benefits granted to the “ABACO investor” for taking a greater risk by investing in a earlier stage of the business.

On the other hand, the shares received by the “ABACO investor” are usually preferred shares with corporate and economic rights similar to those shares that will be received by investors of the subsequent round.

b) Liquity Events. Which may include a change of control, the substantial sale of the company’s assets, a merger, an IPO (Initial Public Offering), among others.

Said liquidity events constitute investor exit strategies, and usually result in the repayment of the invested amount (nonetheless, they may also trigger the conversion to shares) said repayment will be calculated pursuant the formulas determined in the ABACO. In this regard, as we mentioned above, ABACO is not a debt instrument from a legal and contractual standpoint, therefore, the invested amount pursuant to ABACO will not accrue interest on behalf of the investor, hence, it is important for said investor to carefully negotiate the repayment formulas to ensure a profit.

d) Other Considerations. A standard ABACO usually includes investor’s pre-emptive right to participate in subsequent financing rounds, as well as other corporate obligations from the promoted company (such as the issuance of the corresponding treasury shares that will be subscribed and paid upon conversion of the ABACO).

As we have analyzed throughout the article, the ABACO is not considered a debt instrument for legal and contractual purposes, and it is intended to be registered in the promoted company’s accounting, as a contribution for future capital increases; for such purpose, from a financial and accounting point of view, the requirements set forth in  the Mexican Financial Reporting Standards (Normas de Información Financiera) (including NIF C-11 “Capital Accounting” and NIF C-12 “Financial Instruments with equity and debt characteristics”) must be met. Notwithstanding the foregoing, for tax purposes, article 46 of the Income Tax Law provides that in connection with the annual adjustment for inflation that must be performed by the companies, the contributions for future capital increases are considered as a “debt” or “liability”.

Considering the foregoing, upon conversion of the ABACO and the corresponding capitalization of the invested amount, the promoted company must comply with the corresponding tax obligations regarding the capitalization of liabilities, including the obligation of keeping the minutes of the shareholders’ meeting approving the capitalization, (which we suggest to be notarized in order to have a “true date”) as well as obtaining a certification from a certified public accountant on the existence of the liability and its corresponding value, in accordance with Article 30 of the Federal Tax Code (Código Fiscal de la Federación), and the other requirements established by rule 2.8.1.19 of the Miscellaneous Tax Resolution for 2022 (Resolución Miscelánea Fiscal para 2022).

In conclusion, ABACO is a highly recommended instrument for entrepreneurs who seek to raise seed capital, as they can be easily negotiated with investors and derive on a fair valuation of the company by extending such valuation to the subsequent financing round. However, it is important that both entrepreneurs and investors are duly advised by legal and tax specialists when negotiating these instruments; the attorneys of the corporate and tax practices of Acedo Santamarina have the necessary experience to advise on these, and any other type of private equity transactions.